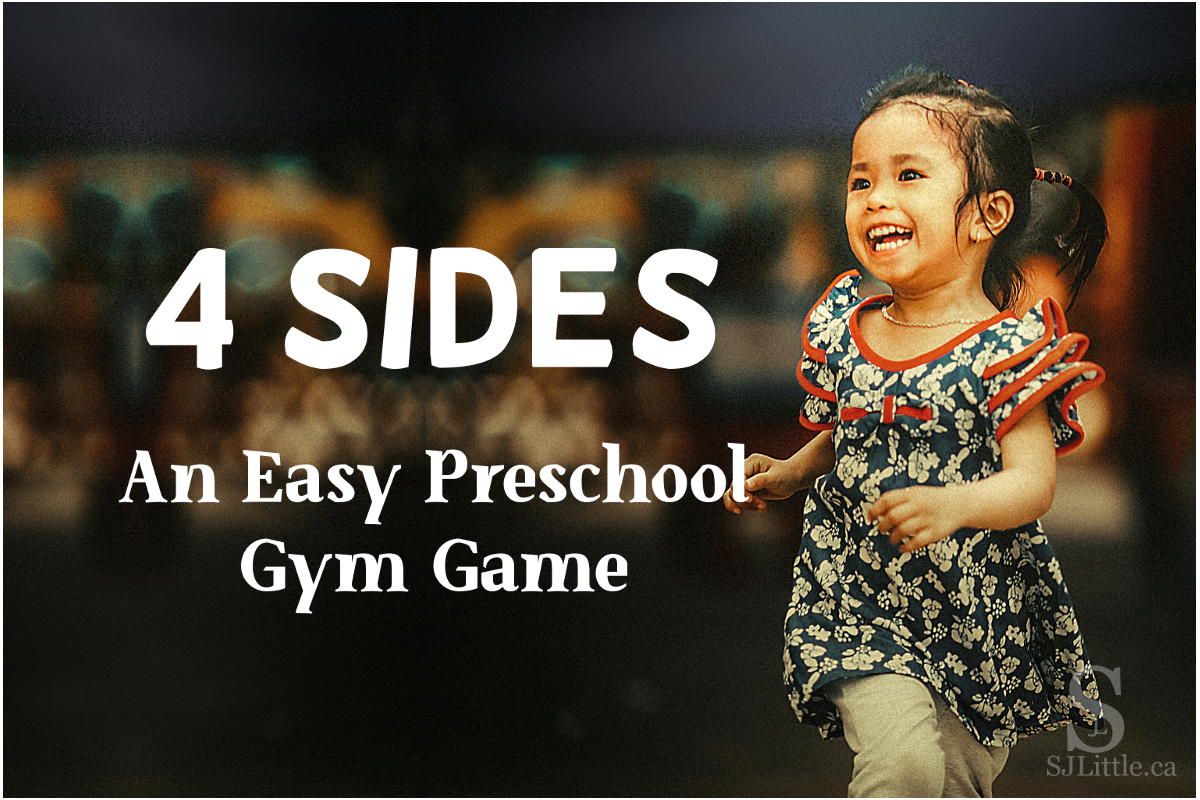 The following game gets children moving with very little prep required. As an easy preschool gym game, it can be adapted to most spaces and adjusted for nearly any theme.

Ideas for the four sides

How to choose which action

Looking for more no prep, super easy preschool gym ideas to get your children moving? Check out Run, Run, Run – When running in circles is a very good thing for children.

Interested in a preschool song that can go with just about any animal theme? See “If You Want To Be A…” 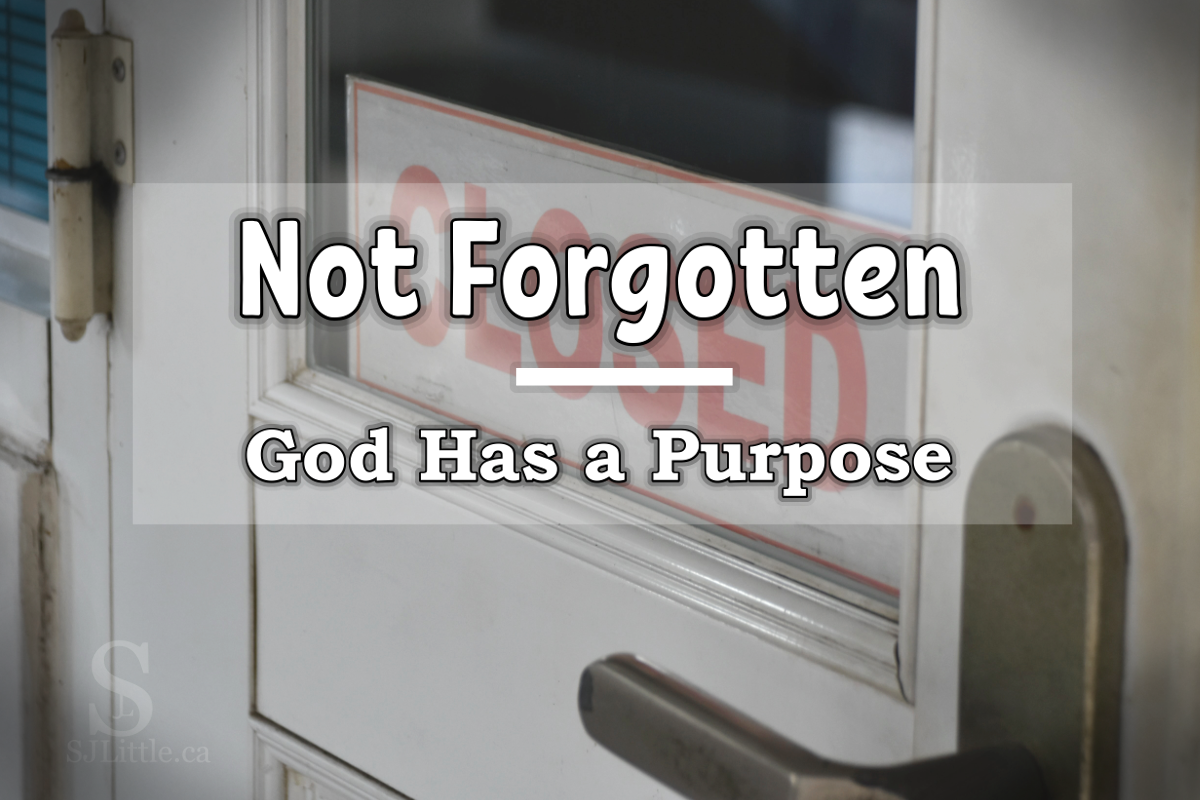 Have you ever had a part of your life that seemed to sit unused and useless for a long time? Have you wondered if God has a purpose for it?

At a busy shopping centre I often drive by, there is a restaurant. For many years it was a pizza place. People came and went, enjoying the food and atmosphere. I ate there a couple of times.

Then one day a sign appeared on the door. The lights went off, and eventually, they took their logo down. They were closed.

For quite some time, the building sat empty, even as other stores and restaurants around them stayed busy.

Then someone bought the place. Construction vehicles started showing up. From the outside, we couldn’t see much change, but inside things were being improved.

They put up a new sign, then announced their opening.

For a while, people came, but soon the parking lot looked empty again. One day a sign appeared on the door saying it was closed. 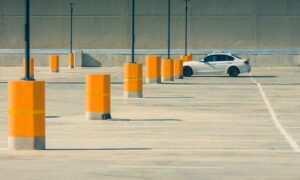 Again it sat month after month with a closed sign. The lights were off and the parking lot abandoned.

Several years went by as the building sat empty. Countless people drove past it daily on the busy main roads, but no one stopped to go in.

True, the building was in the far corner of the shopping centre but it was very visible from the main roads. Why did it sit empty for so long?

Fast forward to March this year. With the coming of COVID-19, many businesses were temporarily closed. Shopping malls sat abandoned and restaurants empty.

One place, however, began to see action.

The parking lot of that long-abandoned building began filling.

First, some work crews showed up, then tents were erected outside.

Every time I saw it, I wondered who was moving in. Were they simply using the parking lot? Had another restaurant bought the place? I watched for clues.

Before long, I saw line-ups of vehicles outside. This particular building was surrounded on all four sides by a parking lot. The line-up of cars began at the tents and wound all the way around the building. What were they doing?

Then I found out. My city had set up several COVID-19 testing drive-through sites. This was one of them.

The long-abandoned building now had a purpose. Its parking lot was beautifully suited for the task.

Now, instead of sitting forgotten and unwanted, this building was helping save lives.

I believe God sometimes works this way in our lives.

Sometimes He gives us skills and abilities or previous experiences that seem to sit idle and unused for a season. We wonder why they exist. Could it be that God has a purpose for them?

Perhaps one day God will point to that part of my life or your life and say “Now is the time. I want to use you this way.”

The Bible gives some examples along these lines. Examples of situations when something seemed random or worthless, only to later become evidence that God has a purpose in everything He does.

It was some time after Esther was made queen that the king passed the law against the Jews. Only then did Mordecai say to her “Who knows, perhaps you have come to your royal position for such a time as this.” (Esther 4:14b CSB)

Similarly, when David finally became king after fleeing from King Saul for years, I’m sure he found his experience from serving as Saul’s armour bearer useful. (1 Samuel 16:21)

Do you sometimes wonder what purpose God has for you?

Thankfully, we can trust that He knows what He is doing. God has a purpose. We don’t need to worry if there are talents or experiences in our lives that seem forgotten and unused right now. Just like the building, at the right time, God will use them as He sees fit.

As He said to Peter “You do not realize now what I am doing, but later you will understand.”  (John 13:7 NIV) 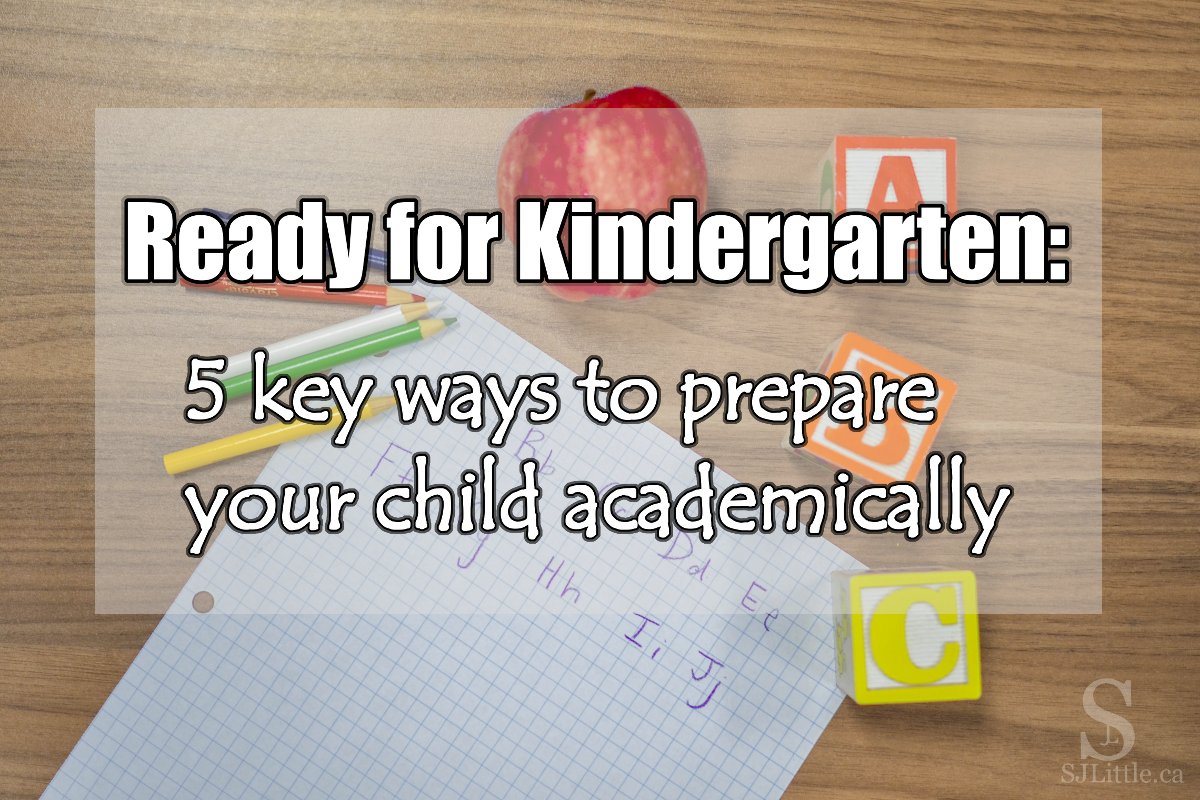 Of course, there are other areas, such as social and emotional development, that must be matured in order to be ready for kindergarten, but that’s another topic for another time. So, without further ado, here are the top 5 key ways to prepare your child academically for kindergarten.

This is usually the first thing parents think of when they think about getting their child ready for kindergarten. Singing the alphabet song is a great start, but don’t stop there.

Numbers are another of those things that can be taught and practiced throughout the day. “How many apple slices do you want for snack?” “I see you have one, two, three cars parked in the garage.” Teaching numbers really isn’t hard.

Having a wide base of general knowledge helps children feel more confident and enables them to more easily grasp new concepts by connecting them to concepts they already know. Therefore, it is valuable for a child to be exposed to a broad range of learning opportunities. This doesn’t have to be complicated. Rather, during your day to day activities, take the opportunities that come. Do you see an orange butterfly? Point it out to your child. Is a cement truck driving by? Tell your child what it is and what it does. In this way, by the time they are ready for kindergarten, your child will have gained a broad range of knowledge that will serve as a launchpad to learning so much more. Here are some things to keep in mind.

I’ve left this point until last as I want to be sure you remember it. Having a desire to learn is more important to school success than knowing the alphabet inside out. Therefore, as you’re teaching your child the things above, be sure to keep it fun.

In summary, preparing your child for kindergarten doesn’t have to be difficult. Be intentional to seize the learning opportunities in your day to day life and your child will be well on their way to being ready for kindergarten. While you’re at it, be sure to have plenty of fun. Learning ought to be a captivating adventure. 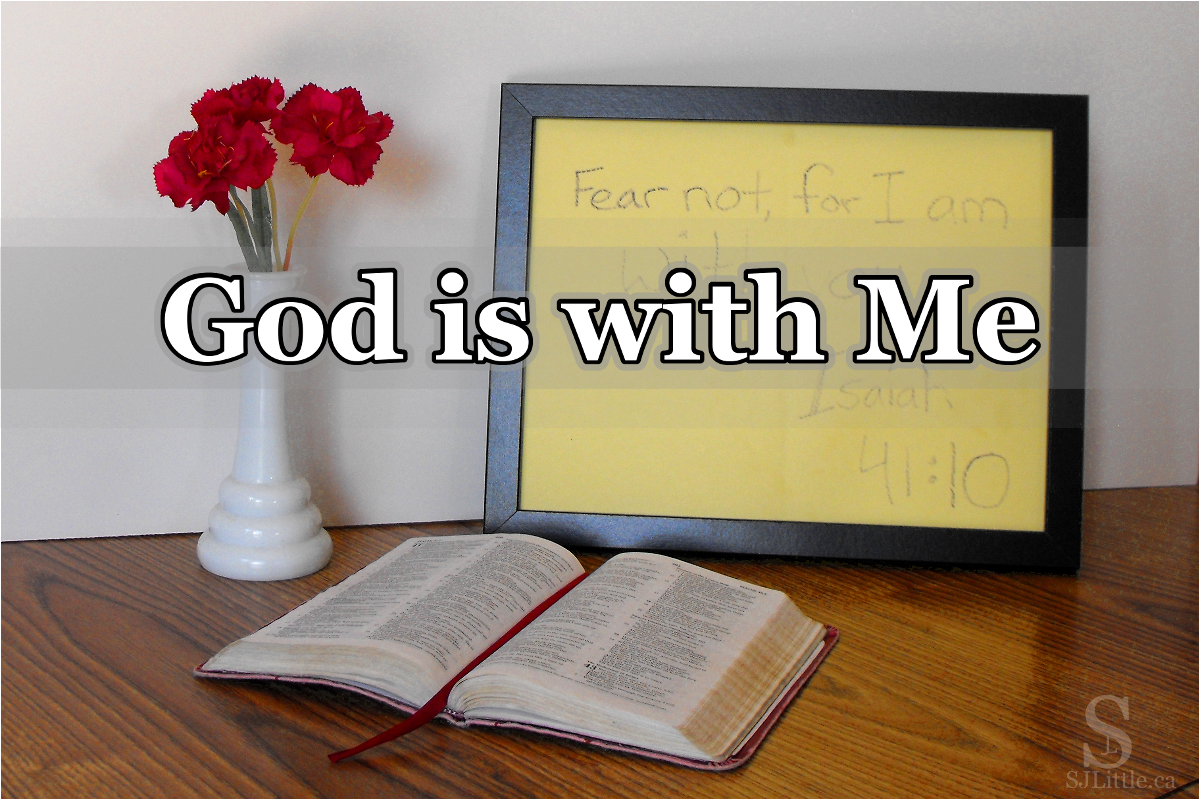 For many months, or perhaps even a year or two, I had a piece of paper on my wall on which I’d written the verse, “Fear not, for I am with you…” (Isaiah 41:10a ESV)

I had scribbled the words across the paper using crayon while teaching a Sunday school class. I debated throwing it out when the class ended. Instead, I folded it and slipped it into my bag. When I got home, I decided to stick the verse on my bedroom wall. I used a little sticky-tack to do so.

Over the following months, that verse was often a refreshing reminder and a needed encouragement. God was with me. When things got challenging, I wasn’t alone. He would help me. What an important reminder.

Gradually over time, the little piece of sticky-tack began to lose its stickiness. Then one day, I bumped the paper. It fell behind a desk and bedside table. I could not reach the paper to put it back up without moving the furniture and everything on top. Deeming that too much work, I left the paper where it was, knowing that one day I would find it again.

The little piece of sticky-tack remained on the wall, reminding me of the absence of the paper.

With the paper no longer there, I wasn’t frequently reminded of that beautiful verse: “Fear not, for I am with you…” (Isaiah 41:10a ESV)

As is often the case, life got busy and I became accustomed to not seeing the verse.

Then one day, as I sat in my room typing, I looked over at that little piece of 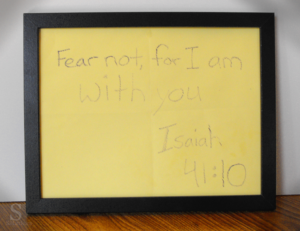 sticky-tack and realized that I hadn’t thought of that verse for quite some time. Indeed, that very day I had been feeling a need to be reminded that God is with me.

This led me to ponder how sometimes in life, I easily and unintentionally slide from a place of closeness with God. I come to the point where I rarely remember to think of Him throughout the day. I forget that God is with me.

Sure I may still go to church on Sundays and read my Bible and pray, but I’m not mindful of His presence with me. My mind doesn’t keep jumping back to the things above. Songs of praise are rarely spontaneously on my lips.

Somewhere along the line, the frequent reminder of God’s presence with me slipped out of sight and I wasn’t intentional to put in the effort to bring it back. Like the paper, I let it slide and then, in the busyness of life, forgot about it.

Oh, that my heart would be inclined toward God and that my thoughts would often run to things above.

Today I dug out that paper and put it back up. This time I put it in a frame so it’ll be less likely to fall again. I want to keep in mind that God is with me. He has not left me alone. He will help me, and I am His. 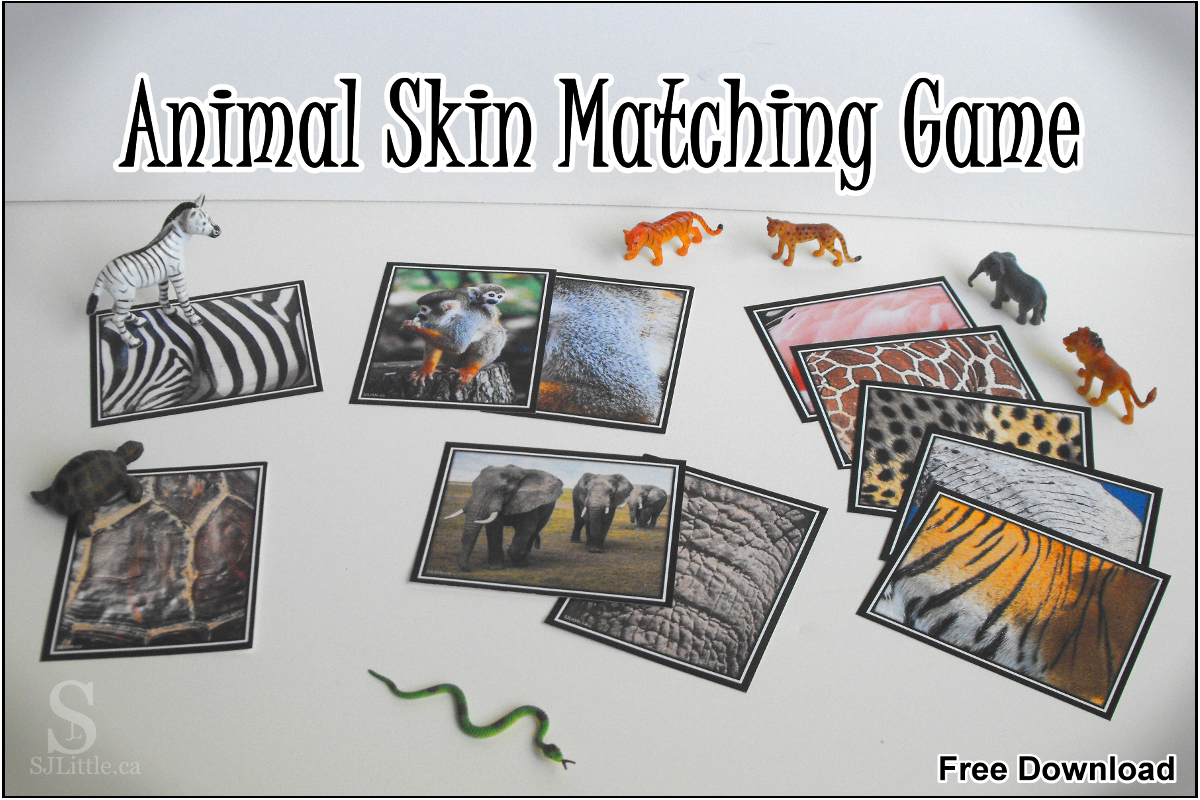 Preschoolers love animals and so do I. Preschoolers also love guessing and learning. That’s why I’ve created this Zoo Animal Skin Matching Game.

Download and print the free Animal Skin Matching Game which includes 12 zoo animal skin pictures and photos of the corresponding animals. (Big thanks to the Unsplash community for providing such excellent photos!)

Cut the photos and, if possible, laminate them for increased durability. 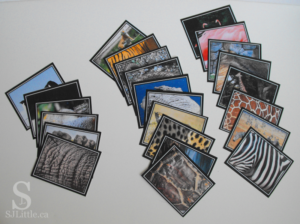 If you have a set of small zoo animal toys, I would encourage you to use those to match with the printed skin pictures rather than using the matching animal photos I have provided.

Play at home (groups of 1-4 children)

Play in a video call

What extended learning have you done with your children alongside the animal skin matching game? 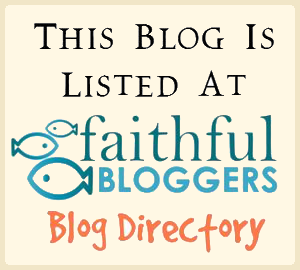