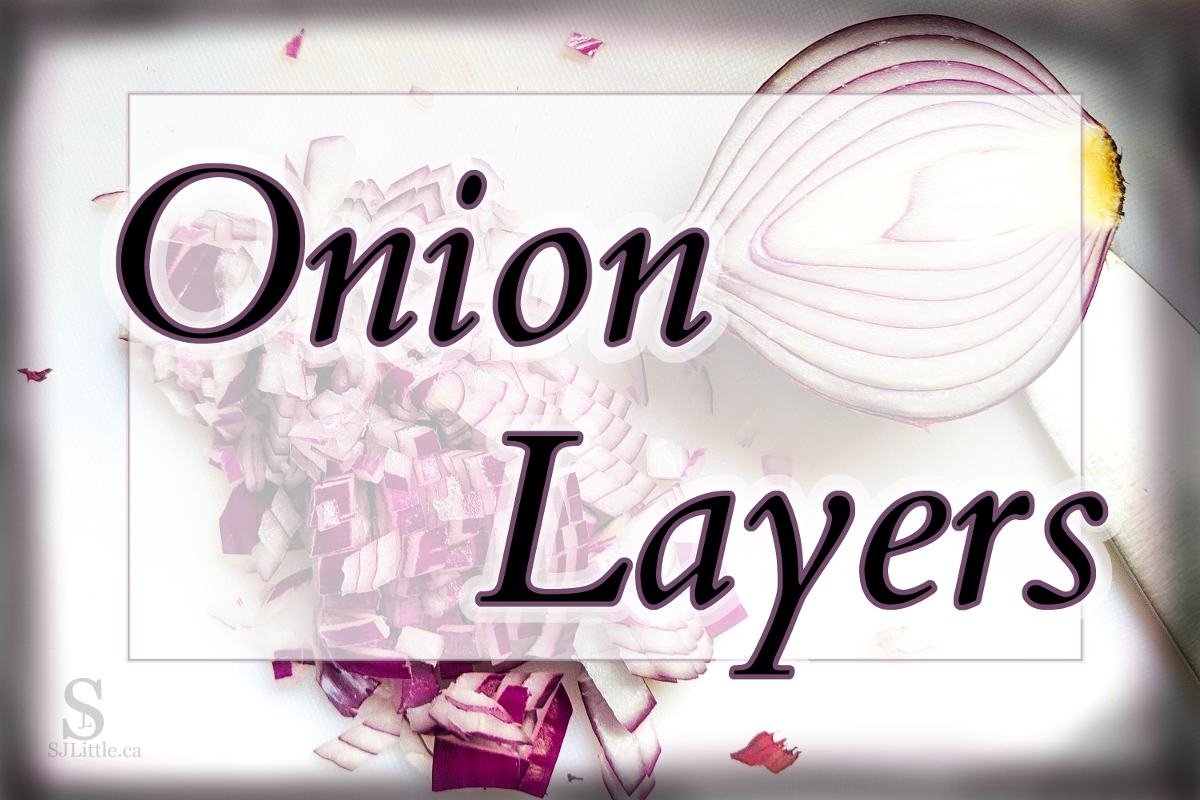 I glance at the clock. Time to start making supper. As I close my computer and head toward the kitchen, I decide that stroganoff would make a tasty meal tonight.

At the pantry, I reach for onions. Since this batch of onions was starting to go bad, I’m glad the bag is nearly finished. I make a mental note to put them on the shopping list. 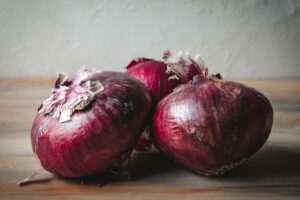 Pulling out two onions, I glance at them. One is large and decently healthy looking. The other is small and covered in rot.

I place the cutting board on the counter and begin peeling the larger onion. That done, I locate my favourite knife and slice the onion in half.

I frown at what I see inside.

Although the large onion appeared healthy, the center has a rotting section. With a sigh I dissect it, discarding what’s bad.

I eye the smaller onion. If the onion that had appeared considerably healthier on the outside was rotten at the core, what chance did this miserable looking onion have of containing anything good at all?

Maybe I should just throw it out.

I glance at the pile on my cutting board of chopped good onion. It’s not as big as I want it to be for the meal. I could grab another onion from the bag and out-right discard the bad one. However, I wasn’t planning to shop for groceries for a few more days. With the onion bag so low, perhaps it was worth checking to see if the smaller onion had anything worth keeping.

Resigning myself to the unpleasant task, I gingerly reach for the smaller onion. I’ll give it a try.

I slice the onion open. 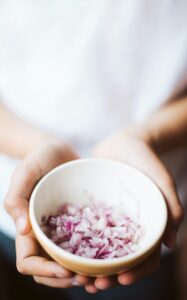 I shake my head in wonderment. I’ve long known that onions go bad more or less in layers. Peel away the bad layers and you’ll likely find good usable onion within. This particular bag of onions, however, had thus far contained several onions that appeared mostly healthy on the outside, but had a bad section at their core. How amazing to find that the one onion that looked the worst was actually the best inside.

As I toss the chopped onions into the frying pan and turn on the heat, I find myself thinking about how people can have layers as well.

Perhaps the most well-known verse to go with this thought is 1 Samuel 16:7b – a verse I memorized as a child.

When did God say these words? God spoke them through His prophet Samuel when choosing a new king for the nation of Israel. God didn’t choose the strongest or the best looking. He chose David, a young shepherd boy at the time.

Here’s another translation of the verse: “Humans do not see what the Lord sees, for humans see what is visible, but the Lord sees the heart.” (1 Samuel 16:7b CSB)

Just like with the onions, I cannot see what is inside those around me, but God can.

If you grew up attending Sunday school, you’ve probably heard this principle many times. I know I have. It’s an important reminder from time to time, yet as I pondered the onion allegory, I wondered if there was something more for me to learn here.

Then I recalled another passage of Scripture – a rather convicting one.

In Matthew 23, Jesus was pointing out the errors of the religious leaders of the day. He said:

For now, the lesson for me to consider has to do with my own core. What are my thoughts like and how do I behave when no one is there to see me? Am I rotten in these private unseen parts of my life?

It is so easy to do as the Pharisees did and focus on making the outside of my life look good.

Earlier in the same chapter, Jesus had said: “Everything they do is done for people to see.” (Matthew 23:5a NIV2011)

So how am I doing? Am I seeking God with all my heart or is it all for show? Am I giving Him room to work in the hidden areas of my life to be transforming me into His image? Or do I need to repent of selfishness and greed and hypocrisy and wickedness?

Will I be like the religious leaders who prompted Jesus’ cry at the end of Matthew 23?

“Jerusalem, Jerusalem, you who kill the prophets and stone those sent to you, how often I have longed to gather your children together, as a hen gathers her chicks under her wings, and you were not willing.” (Matthew 23:37 NIV2011)

Or do I pray as David did?

“Search me, O God, and know my heart!

Try me and know my thoughts!

And see if there be any grievous way in me,

and lead me in the way everlasting!” 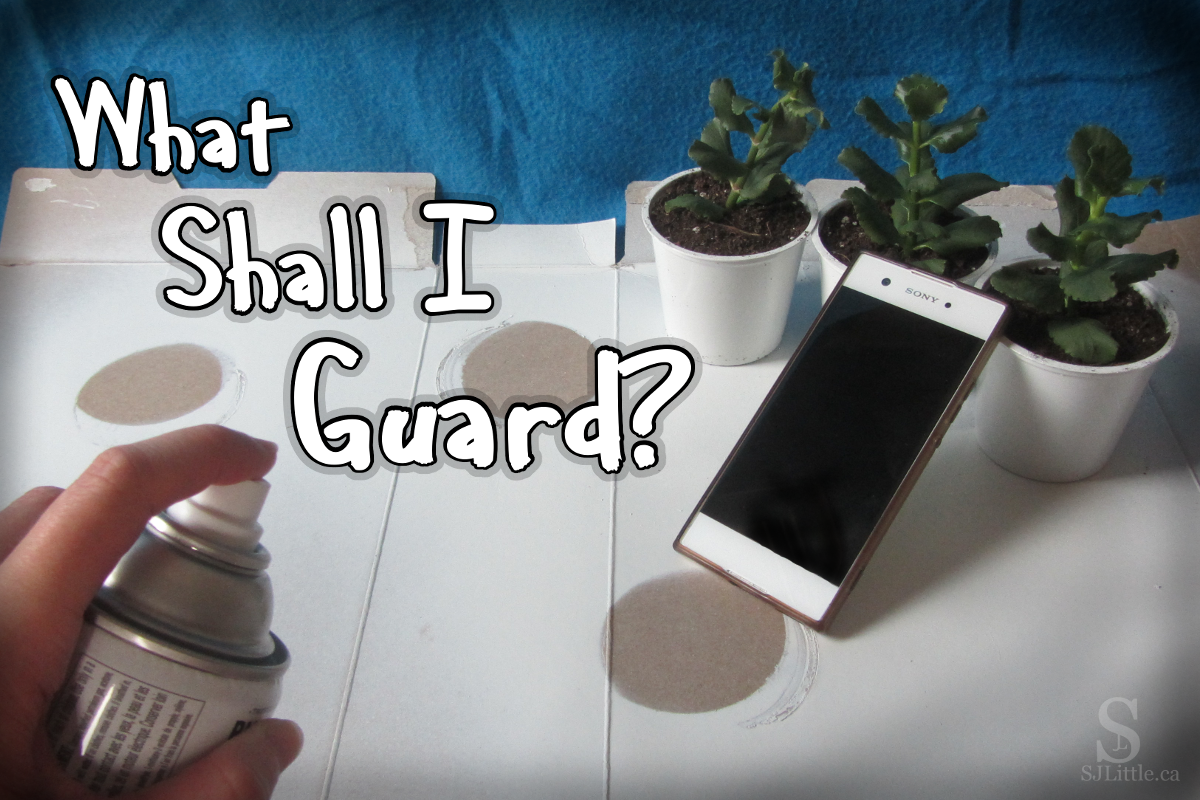 A few days ago, I needed to do some spray painting. I gathered old cardboard, the little flower pots I planned to paint, and the spray paint can.

I switched into old jeans and a t-shirt and took my watch off to keep it clean.

Outside, I set everything up. Then I looked at my phone.

I was expecting a text soon to which I’d need to reply. Therefore, I couldn’t leave the phone inside and miss the message. However, I certainly didn’t want to get paint on my phone!

I slipped it into my back pocket. That wouldn’t work. The pocket was too short leaving part of the phone exposed.

Pulling it out, I studied my phone. One end of the phone had the cameras and the headphone jack. Paint on the main camera would prevent me from taking pictures, but I often enjoy using my phone camera. Spray paint over the reverse camera would make Zoom calls impossible. Not good. As for the headphone jack, I don’t use headphones often, but losing the option wouldn’t be favourable. Therefore, I slipped the phone back into my pocket with the camera side down. That would keep it safe. 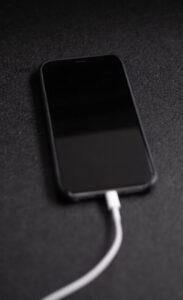 But wait! The part of the phone now exposed was the power cord plug-in! That would never do. If the phone can’t be charged, then none of its functions would be usable!

Reluctantly, I switched it the other way around. Now the power plug-in was protected. I would be disappointed if the camera got damaged, but I owned a different camera I could use. What I wouldn’t have was a working cell phone if this one died.

Thankfully, I didn’t get any paint on my phone. I was paying enough attention to not touch it when my fingers were sticky with paint.

Why do I recount this little story? Because there is a lesson here for me.

Similarly to how I needed to choose which part of my phone to protect, I must choose every day what parts of life I protect the most.

To some people, taking the time to think about which way to put my phone in my pocket may seem excessively cautious and pointless. Likewise, I sometimes neglect to put thought into what I want to prioritize in my life. It seems unnecessary to take time to think about prioritizing when I could be using that time to accomplish something instead.

The challenge is, like with my phone’s power plug-in, if I fail to guard the most important parts of my life, everything else will suffer.

So what parts of my life should I guard?

What the Bible tells us to guard

To find the answer, I did some research. I searched for the word “guard” in the Bible. Here are some of the verses I found.

I must be sure the way I am living does not involve evil.

“The highway of the upright turns aside from evil; whoever guards his way preserves his life.”  (Proverbs 16:17 ESV)

What do I use to help keep my way pure and good? The Bible.

My heart needs tending to as well.

“Above all else, guard your heart, for everything you do flows from it.” (Proverbs 4:23 NIV)

Here’s something I must guard against.

“[Jesus] said to them, ‘Take care, and be on your guard against all covetousness, for one’s life does not consist in the abundance of his possessions.'”  (Luke 12:15 ESV)

Okay, but which is most important? With my phone, the power cord plug-in is by far the most important thing to guard. What about in my life?

If I am careful to guard God’s position as the first priority in my life, the rest will fall into place so much better.

God will help me

Easier said than done! Thankfully, God will help me guard my life according to His ways. I can trust Him to do so.

“I will lift up my eyes to the mountains; from where shall my help come?

My help comes from the Lord, who made heaven and earth.

The Lord will guard your going out and your coming in