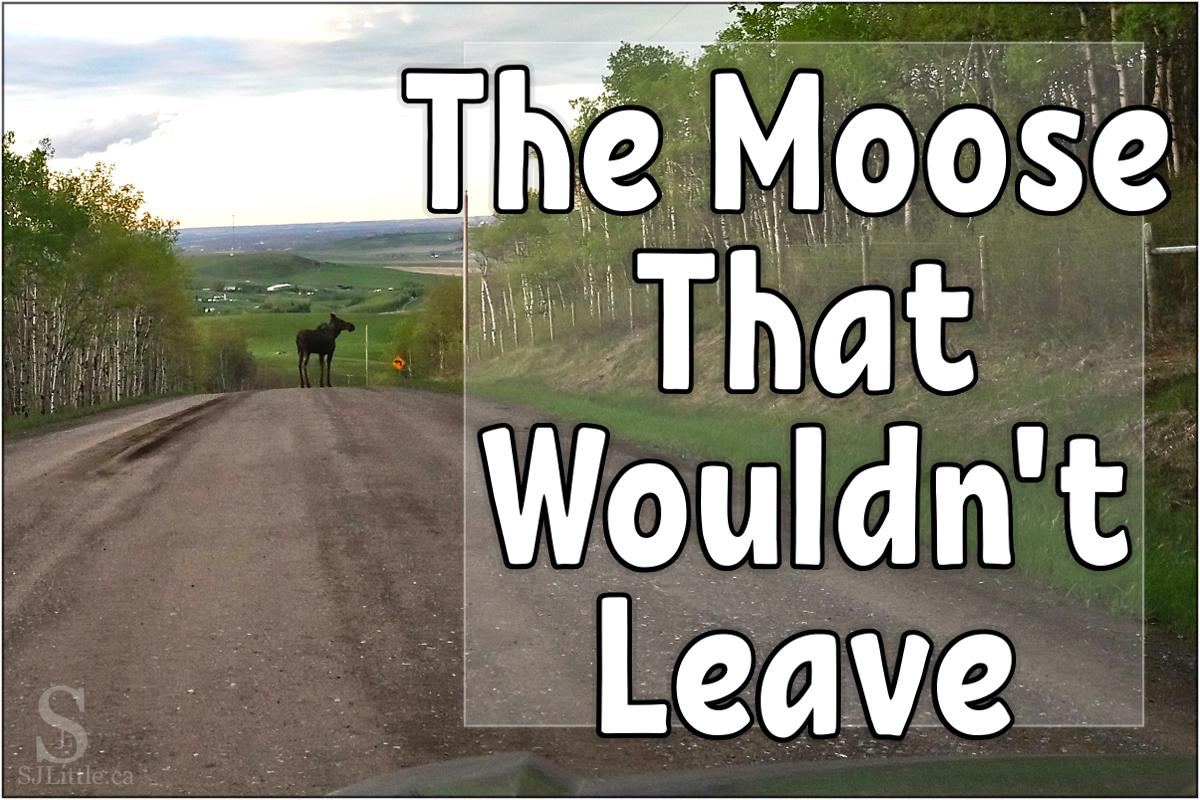 Encounter With The Moose Who Wouldn’t Leave

About a year ago, as I was driving back from a visit to the country, I enjoyed the warmth in the air and the fresh greenness of the trees.

I was on a winding country road just wide enough for two vehicles.

As I wound my way past open fields and wooded patches, I came to the top of a hill.

Suddenly, I hit the brakes hard. My wheels skidded on the loose gravel.

There, in front of me, standing in the dead centre of the road was a moose.

The moose stared at me. I was grateful to have stopped so far back. It had no antlers, but, boy, was it big!

I assumed the moose would soon move on, but it didn’t.

At length, the moose turned, though it didn’t leave the road. It looked at the fence to the right of the road.

It took me a moment to notice movement on the other side of the barbed wire fence.

First I thought “coyote”, but that wasn’t right. Soon I realized it was a baby moose.

Gradually the mother moose wandered down the road ahead of me, keeping one eye on the young moose on the other side of the fence, and one eye on me.

I trailed her down the hill at a distance. She was still mostly on the road, and, being in a small car, I didn’t try to pass her. We always talk about the dangers of a mother bear with her cubs nearby. Would a mother moose be dangerously protective of her little one? I didn’t want to find out.

Once or twice, the young moose tried sticking his head through the barbed wire, but pulled back. It seemed he was stuck. I wished I could do something to help, but was pretty sure the mother wouldn’t be pleased.

At the bottom of the hill, the fence continued straight while the road curved away. The mother took a few steps off the road following the fence.

Was this my chance to pass?

The mother moved back into the middle of the road. I was still stuck.

Then suddenly, movement caught my eye. The little moose climbed through the fence and hurried to join his mother on the road.

Quickly, I switched into reverse to give them some extra space.

When I stopped again, I watched intently. The young moose was so little beside his enormous mother!

They crossed the road happily. 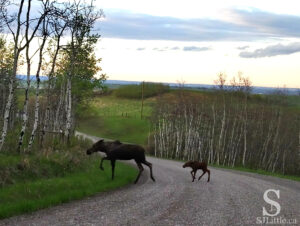 At the other side of the road, there was another barbed wire fence.

The mother stepped over the fence without the slightest hesitation.

The little one wasn’t so sure.

With my window still open from earlier, I could hear the little one’s bleating as he passed me. I could nearly have mistaken the sound for a low bird’s chirp. He was so small, very much a baby. He wanted to be with his mother on the other side of the fence, but it was challenging to get through the fence.

As I drove away, I wasn’t worried about the little one. He had gotten through the first fence. Once he got up enough determination, he would get through the second one too.

That mother of his, she wasn’t going to leave him. She would continue to wait patiently for him to finally decide to climb through the fence just as she’d done with the first fence.

God Won’t Leave His Own

What a privilege it was for me to witness that scene. Yet it wasn’t an accident. Indeed, there is a lesson there for me to learn. As I drove home, the image burned in my mind.

Sometimes God leads me through obstacles, such as fences. Those fences can be taller than me and have sharp barbs on them. There may be no way around them, and they may seem impassable.

God, however, has a goal in mind. He steps across the barrier and says, “Come.”

Like the little moose, I might try to stick my head through a few times, but pull back. I might try to follow the fence to the left or right, but I won’t get anywhere.

Thankfully God waits patiently, like the mother moose, with a fierce protective love. A love that, though it could let me stay where I am, wants to lead me further to something more wonderful.

Surely that little moose felt intimidated by the fence. Surely his pleading with his mother included “Come back,” and “I can’t do this.”

At last, the little one wanted to get through desperately enough that he did it.

Thankfully God can do more than the mother. While the mother moose could do nothing more than wait and watch for her little one to cross the fence, God can, and will help us cross it.

Still, we have to want it enough.

Once the little one had made it past the first fence, the mother led him to another fence to cross. Yet throughout the process, she never left him.

God will never leave us, no matter what seemingly impassable obstacle He asks us to climb through. Beyond that, He will give us the courage we need to follow Him through it.

We see an example of this when God sent Joshua and the Israelites up to conquer the new land. They had to move forward against very intimidating enemies, but God was with them and helped. As He said to Joshua,

“Have I not commanded you? Be strong and courageous. Do not be frightened, and do not be dismayed, for the Lord your God is with you wherever you go.” (Joshua 1:9 ESV)

Today, may I take courage and trust God as I follow where He leads me.