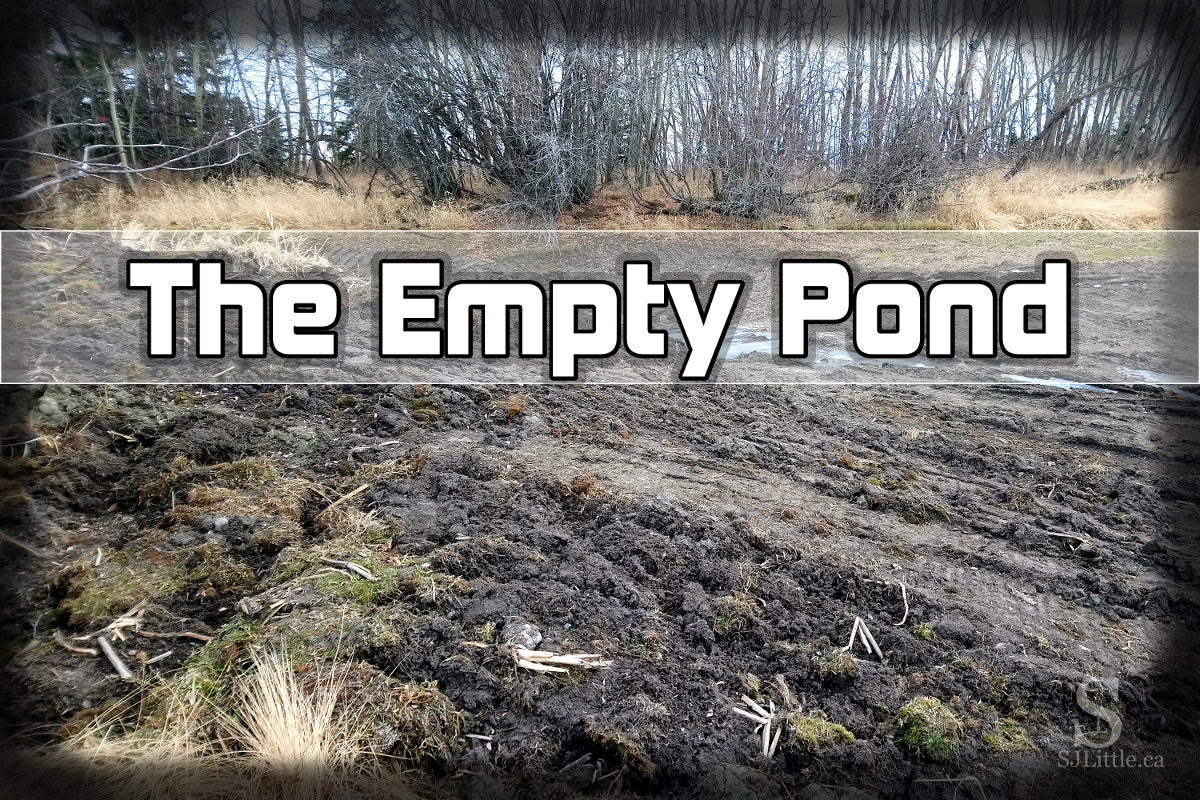 I followed the familiar path, thankful for a chance to get outside. The air had a chill, but only the smallest patches of snow lay where the sun could not find them hidden beneath the shadows. Otherwise, the ground was dry.

In fact, everything was dry. The grass was brown and the trees stood bare. The leaves, the trees had dropped, crunched under my feet. There was little colour anywhere beyond brown, brown, and more brown.

I stepped through the fence and swept fallen leaves off the bench before sitting on it. I stared at the pond in front of me. It was empty. There was no water.

Our summer had been longer and more dry than most years. The pond that typically had at least a little water all year round – indeed, sometimes enough to skate on in the winter – now lay empty.

It was more than that, though. This fall, not only had the pond become empty, but the typically impassable gooey mud of the pond bed had dried out to the extent that the property owner was able to drive heavy machinery through the pond. I could still see the thick tread marks.

The heavy machinery had been used to push dirt around. A large mound lay to the side. Much of the pond bed was now raw exposed dirt.

Yet, as I sat there, I was not displeased at the sight of thick tread marks and mounds of dirt because I knew the purpose.

The property owner had dug the pond deeper. Why? To increase its capacity. When the winter snow melts and spring rains come, the pond will be able to hold even more water than before. This will make it less likely to dry out when the following summer turns to autumn.

This deepening of the pond bed was something the property owner could only do during the rare times when the pond dried up. Not only did the pond need to be empty for such work to be done, but the mud at the bottom of it needed to dry for long enough to support the weight of the heavy machinery without causing it to sink and get stuck.

I leaned back on the bench listening to the occasional bird call in the otherwise silent afternoon.

Surely there was something to be learned from this pond, a lesson I could learn.

A sober thought came to me.

It is only when I am empty that God can do the work of increasing capacity in me.

True, there are many ways God works in my life.

While the property owner could trim the bushes around the edge of the pond, or add stones to the path leading to it while it was full, there are some kinds of work he could not do until the pond was beyond empty.

Likewise, God can work in my life in many ways, but some kinds of deepening can only be done when I am empty – empty of myself.

So what is it that the Lord wants to increase my capacity for? Some things, such as His love, His joy, and abundant life, He wants to give everyone who believes. Not a problem-free life, but a life marked with the inexpressible joy and peace that only comes from Him.

Paul prayed that God would enable the Ephesians to “know Christ’s love that surpasses knowledge, so that you may be filled with all the fullness of God.” (Ephesians 3:19 CSB)

Next time I am feeling empty and surrounded by the browns of a winter not even brightened with snow, I hope I will remember not to panic. Instead, I ought to seek God and trust that this is the time when He can do His work of increasing capacity in me for more of Him.

“Now may the God of hope fill you with all joy and peace as you believe so that you may overflow with hope by the power of the Holy Spirit.” (Romans 15:13 CSB)