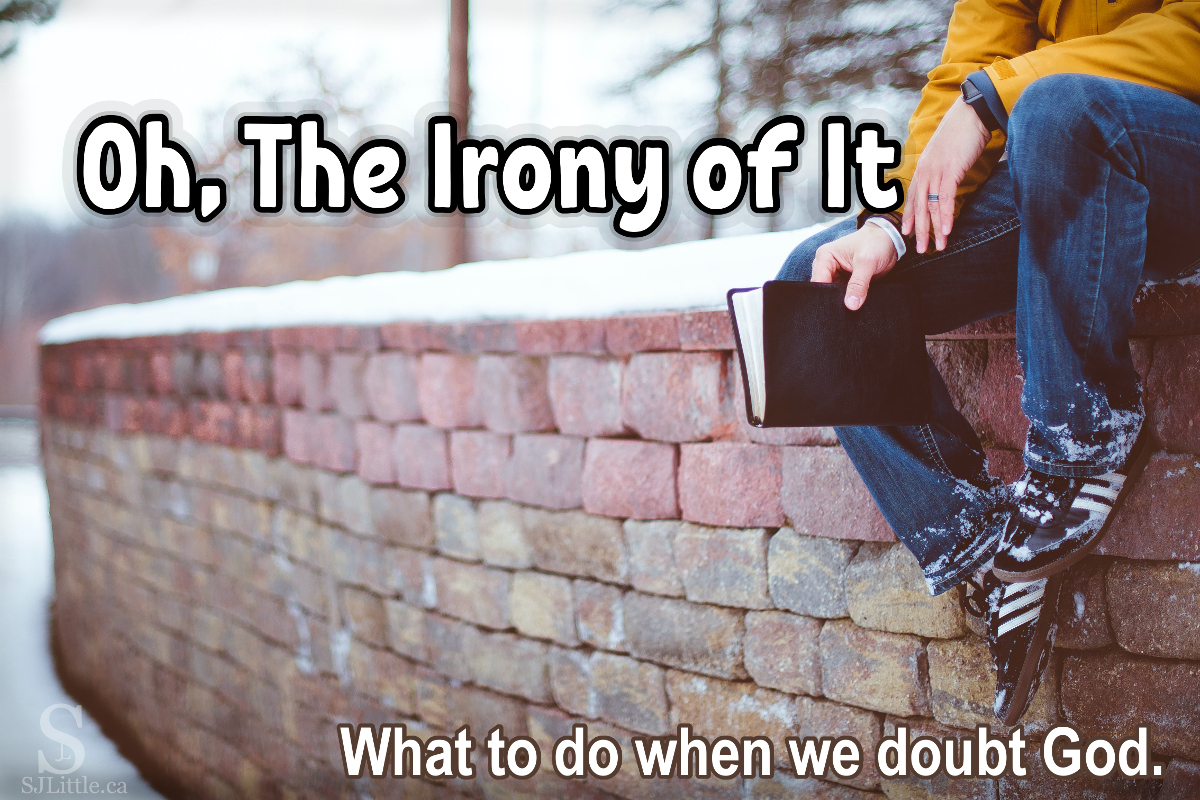 What to do when we have doubts about God

Have you ever noticed how many things in our lives are ironic?

You see, we had some winter weather come through the night before. The following day, I headed out for my usual walk around the block. Some of the sidewalks were snow-covered, but they didn’t have ice underneath, so I stepped confidently. When I reached the road, however, I didn’t think to change my stride to account for the black ice hidden beneath the thin layer of snow. Suddenly I slipped! I landed hard on my elbow and hip. Quickly I picked myself up. Nothing was broken, but I knew I’d be sore. Sheepishly I brushed the telltale snow off my pants and jacket while I glanced around. No one was in sight to have noticed my tumble. More cautiously, I finished my walk without further incident.

Once home, my elbow and hip were starting to burn. So what did I do? I put ice on the injury ice had caused. I couldn’t help but smile at the irony!

(It has been several weeks, and multiple new layers of snow, since the incident. I can assure you that the bruising is gone and I am fine. Also, I have adjusted my walking into winter mode, and thus have not fallen again.)

This incident got me thinking. What other ironies exist in life that we typically don’t stop to think about?

Here are some I have thought of. If you think of others, feel free to share them in the comments below.

One way of fighting a wildfire is by using fire – a backfire or controlled burn. That is, when the firefighters work ahead of a fire that is out of control, they pre-burn a section in a controlled way. By doing so, when the out of control fire arrives, it has no fuel to continue forwards.

When learning ways to keep a skunk away, I laughed when I discovered that the answer includes using smell! I am not an expert in this, but apparently they dislike the smell of ammonia, mothballs, and citrus. Who would have guessed that I can use smells to chase away the very creature renowned for its bad smell?

Then there’s the question of how to get more physically fit and in shape. If the person is otherwise healthy, the best way to gain more energy is by using more energy.

There’s also the idea that one of the best ways to learn something new is by teaching it to someone else. More often than not, teachers learn more about a topic than those they are teaching.

The Christian life is full of ironies as well. Here are a couple of them:

“For whoever desires to save his life will lose it, but whoever loses his life for My sake will save it.” (Luke 9:24 NKJV)

“[Jesus], being in very nature God, did not consider equality with God something to be used to His own advantage; rather, He made Himself nothing by taking the very nature of a servant, being made in human likeness. And being found in appearance as a man, He humbled Himself by becoming obedient to death — even death on a cross!” (Phil. 2:6-9 NIV)

If you try, I’m sure you’ll think of more.

One last irony I want to close with is an important reminder for us all.

When I have doubts about God, the very best thing to do with those doubts is to take them to God in prayer.

It is easy for me to fear that perhaps God will be displeased by my doubts so I should try to hide them from Him (as if hiding anything from God were possible). At times like that, I must remind myself of Jesus’ response to Thomas and to John the Baptist. At one point or another, they each faced doubts about God.

“Now Thomas… one of the Twelve, was not with the disciples when Jesus came. So the other disciples told him, ‘We have seen the Lord!’

But he said to them, ‘Unless I see the nail marks in His hands and put my finger where the nails were, and put my hand into His side, I will not believe.’

A week later His disciples were in the house again, and Thomas was with them. Though the doors were locked, Jesus came and stood among them and said, ‘Peace be with you!’ Then He said to Thomas, ‘Put your finger here; see My hands. Reach out your hand and put it into My side. Stop doubting and believe.’

Jesus was not angry, but patient in His response to Thomas’ doubt. I like how Spurgeon puts it.

“[Jesus] takes Thomas on his own ground, considers his infirmities, and meets them precisely as they are, without a single word of rebuke until the close—and even then He puts it very lovingly. The whole conversation was, indeed, a rebuke, but so veiled with love that Thomas could scarcely think it so. He speaks to him as if nothing had occurred to give any cause of offense…” (C. H. Spurgeon – A Memorable Interview)

Then I look at Jesus’ response to John the Baptist. John was in prison. Evidently, he was feeling doubts about Jesus, the One whom he had earlier boldly declared to be the Lamb of God (John 1). Thankfully, John the Baptist knew what to do with his doubts. Since he couldn’t go to Jesus himself, he sent two of his disciples with this question: “‘Are You the Coming One, or do we look for another?'” (Matt. 11:3b NKJV)

“Jesus answered and said to them, ‘Go and tell John the things which you hear and see: The blind see and the lame walk; the lepers are cleansed and the deaf hear; the dead are raised up and the poor have the gospel preached to them. And blessed is he who is not offended because of Me.'” (Matt. 11: 4-6 NKJV)

Yet again, Jesus didn’t rebuke John’s doubts. Rather, He gave him just the reassurance he needed.