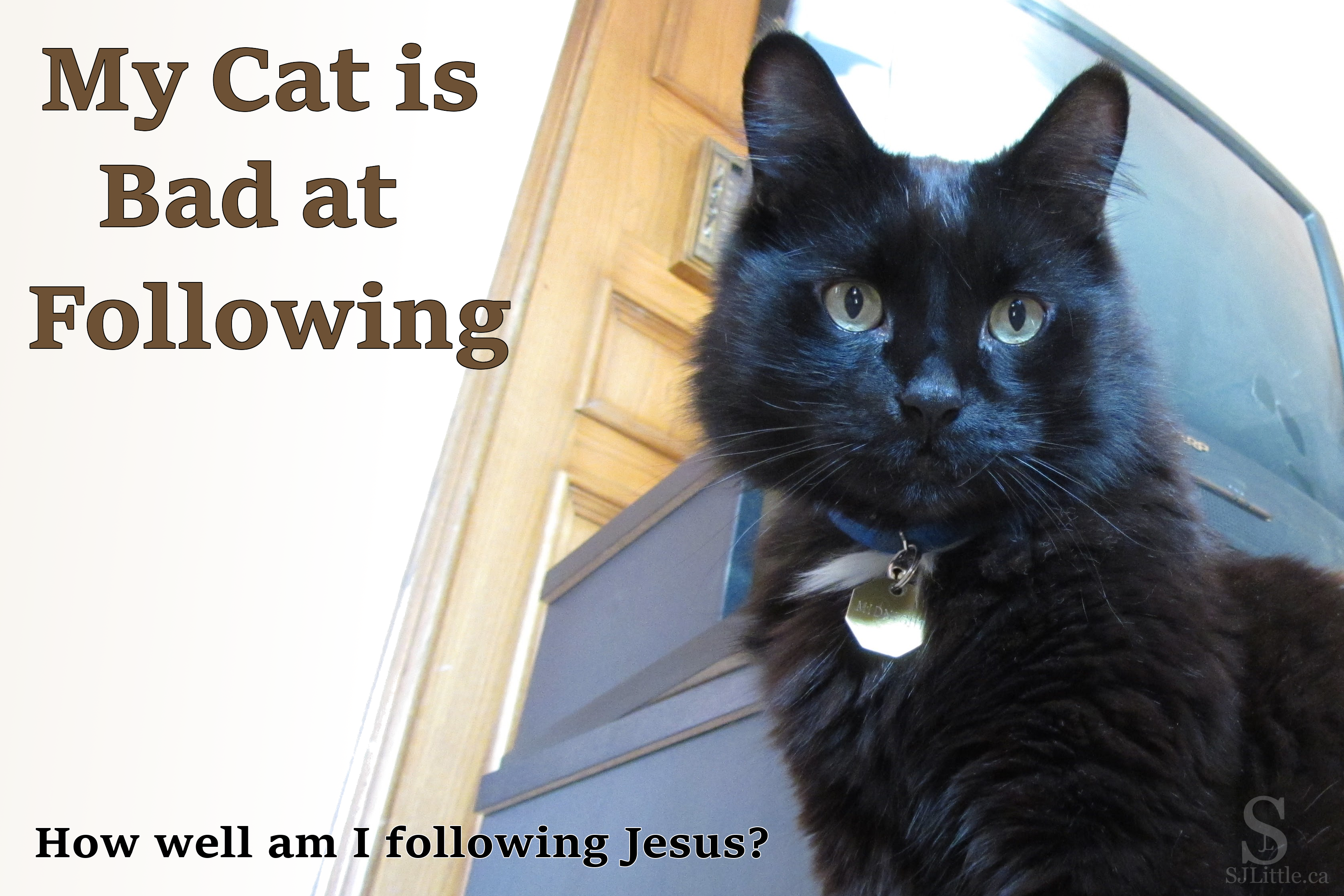 How well am I following Jesus?

I have a cat named Midnight. He is quite the character and has become very social. 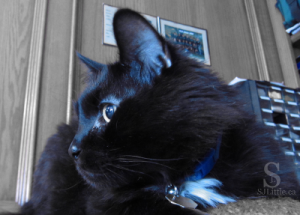 When he was younger, we had his brother as well. Midnight would always let his brother do the talking. I remember watching my siblings try to coax even the tiniest mew out of him with little success. In the years since his brother passed away, however, Midnight has found his voice. Now he often shares his opinions loudly, though at times he merely squeaks.

It’s funny how cats have their own personalities. If you’re a cat lover, you may understand. Midnight’s favourite human food to beg for is the milk left after cereal. His brother, however, was far more interested in ice cream. When Midnight begs for a bowl, he’ll sit a distance away with his back towards the person. As they reach halfway through their meal, he might move a little closer and peek at the person. Only once the spoon is scraping the bottom of the bowl, will he sit at the person’s feet peering up at them. His brother was the opposite. He would boldly sit by the person, staring at them as they ate. With his old age, Midnight is beginning to pick up some of his brother’s boldness.

Midnight is also a very smart cat. He’s learned to open doors. At one point, we had to devise a lock for the cat food closet so he and his brother wouldn’t break in. We’ve trained him to ring a bell when he wants canned food, and I’ve taught him to find some place other than my keyboard to lay down when he wants to cuddle but I’m busy on my computer. Yes, he is a smart cat… most of the time.

He’s Not Good at Following

The one thing he has never seemed to learn is how to follow well.

It has happened often that, when I head down the hallway, he gets excited and wants to come along. I start down the hallway at a decent clip, and he hurries just ahead of me, as though trying to lead me. As I turn to enter a room, I trip over him, because there he is, right where I was planning to step.

It gets worse. Sometimes he will zig zag directly in front of my feet! Not only that, but, looking from above, his coat appears entirely black – not a helpful thing in a dark hallway at night.

I’ve lost count of the number of times I’ve accidentally kicked him because he dodged directly into my path. That’s not including the times I’ve managed to avoid him by stumbling and almost falling myself.

What a silly cat. He’s so eager to go with me, and even lead me, but doesn’t know where I’m going. How can he lead when he doesn’t know the direction? He could have saved himself many a bump if only he’d learned to follow.

Following – that’s what God calls us to do. We are to follow Him.

As you read through the Gospels you’ll quickly see that Jesus often called people to follow Him. Most times there is no record of Jesus telling them where He would lead them, or what their life would look like, but the call to follow is there.

Did you know there are examples of people in the Bible who tried to get ahead of God when it felt as though He was taking too long?

Abraham and his son Ishmael are a blatant example of this. God had promised that Abraham would have countless descendants, but many years passed without Abraham having a single child. Abraham and his wife Sarah were old. They decided that rather than waiting for God any longer, they would help Him out by taking matters into their own hands. Abraham took Sarah’s maid as his wife and had Ishmael by her. That was not following God’s plan, and later their actions led to trouble in their family. You can read the story for yourself in Genesis, especially chapters 16-17, 21. 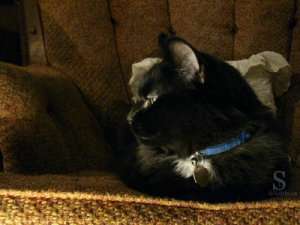 Another way to not follow God is to run in the opposite direction as Jonah did. That never turns out well in the end! (Jonah 1)

Am I trying to get out ahead of God, or running in the opposite direction, instead of following Him?

So much could be said about following God, but this is just one blog post. There’s no way I can fit it all in! I’ll try to stay brief.

Throughout the entire Bible, we see God leading people. Sometimes His leading made sense to those following, but there are also many times when it made no sense at all! Take Jericho for example, or Naaman. (Joshua 6; 2 Kings 5)

Sometimes following God means waiting, such as in Acts 1:4, when they waited for Pentecost. However, waiting doesn’t mean sitting idly. In Acts 1:14-26, they spent the time praying and they chose a man to replace Judas. They were doing what needed to be done, while seeking and waiting for God. I’ve long loved Psalm 37:34: “Wait for the Lord and keep His way…” Yes, we must wait for God, and that time of waiting often includes going about our daily lives in a way that is honouring to God.

Are You Following God?

I wish I had some concrete formula for discerning whether or not I am following God well. If I had such a formula I would gladly share it with you, but I don’t.

What I can say is keep seeking after Jesus. Read the Bible often, spend time in prayer, and be in fellowship with others who know Jesus deeply. Then He will guide you, and if you’re not following Him, He will reveal that to you and help you change course. Sometimes His leading will be loud and unmissable, but other times it may be a quiet door opening that, after prayer and consideration, seems good to step through.

Let me leave you with a likely familiar verse from the Bible.

“Trust in the Lord with all your heart,

and do not rely on your own understanding;

in all your ways know Him,

and He will make your paths straight.”

Are you following God today?